The following Trade Show Booth Rules are based on rules common to US convention centers and are intended as guidelines only. Exhibitors should always carefully review the information included in the exhibitor’s manual for their specific venue or event. Equipment and product being displayed should not be placed in the booth in a manner which obstructs other exhibitors’ displays. Any equipment or product scheduled for exhibition, which could possibly cause a conflict or infraction, should be cleared and approved prior to your show date. 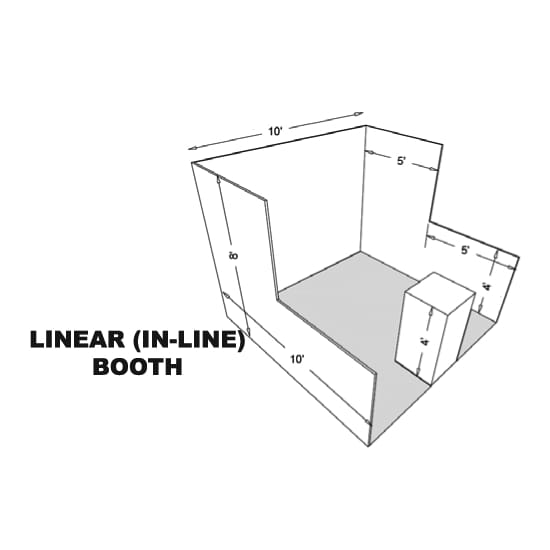 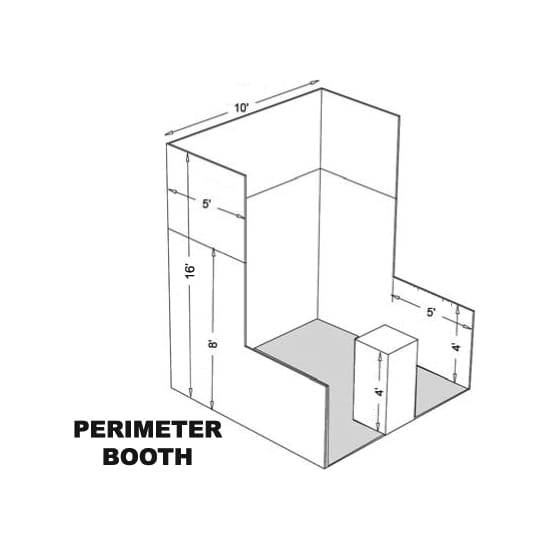 Linear Booths:  Linear booths have one side exposed to an aisle and are generally arranged in a series along a straight line. They are also called “in-line” booths. This configuration also includes corner booths and perimeter booths.

Perimeter Trade Show Booth: A perimeter booth is a linear booth that backs up to a wall of the exhibit facility rather than to another exhibit.  Depending on venue rules and regulations, overall height maybe extended.

Corner Trade Show Booth: A corner booth is a booth exposed to an aisle on two sides, or a booth without an adjacent exhibitor within 10′.

Dimensions: For purposes of consistency and ease of layout and/or reconfiguration, floor plan design in increments of 10′ has become the de facto standard in the United States. Therefore, unless constricted by space or other limitations, linear booths are 10′ deep, i.e. 10’x10′. A maximum back wall height limitation of 8′ is allowed.

Use of space: Regardless of the number of linear booths utilized, (e.g. 10’x20′, 10’x30′, 10’x40′, etc.) display materials should be arranged in such a manner so as not to obstruct sight lines of neighboring exhibitors. The maximum height of 8′ is allowed only in the rear of the booth space, with a 4′ height restriction imposed on all materials in the remaining space forward to the aisle. (Note: When three or more linear booths are used in combination as a single exhibit space, the 4′ height limitation is applied only to that portion of exhibit space which is within 10′ of an adjoining booth.)

Canopies & Ceilings
Canopies, including ceilings, umbrellas and canopy frames, should comply with height and line of sight requirements for the booth configuration being used. The base of the canopy should not be lower than 7′ from the floor within 5′ of any aisle. Canopy supports should be no wider than three inches.

Hanging Displays
Separate hanging sign permission is usually required and may incur an additional fee. Hanging signs are typically only allowed certain booth configurations, such as island and peninsula booths. Height is measured from the floor to the top of the hanging display and is subject to restrictions.

Trade Show Towers
A tower is a freestanding exhibit component separate from the main exhibit fixture that is used for identification display purposes only. Towers are subject to the same height restriction as applies to the rest of the booth configuration being used. 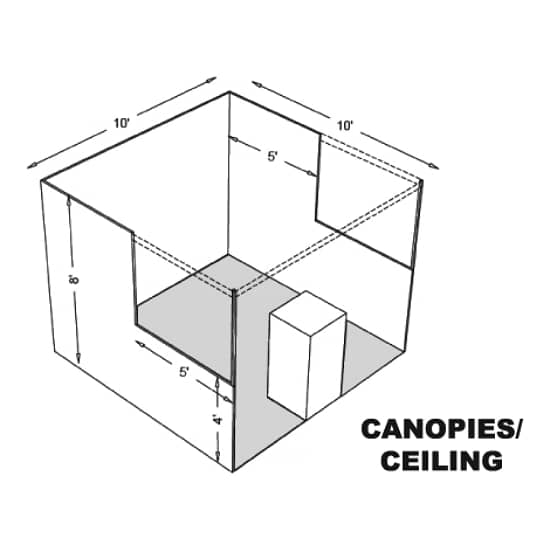 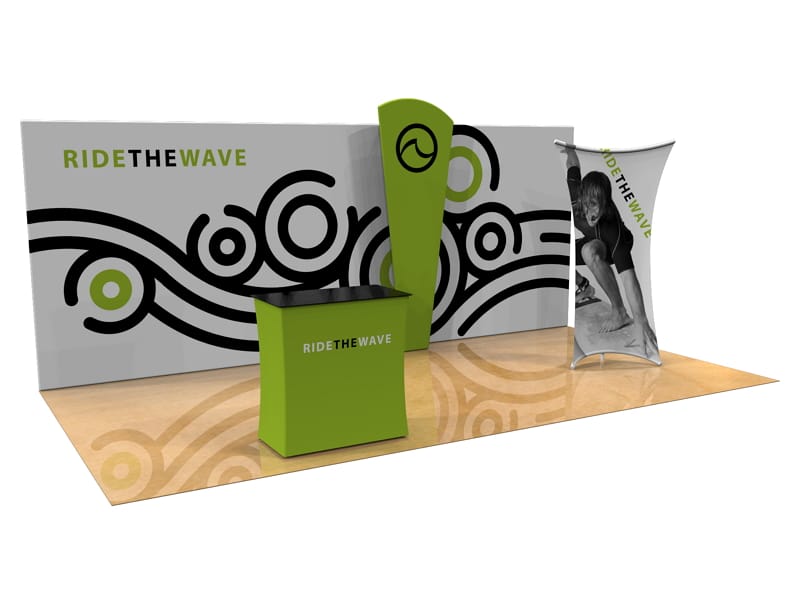 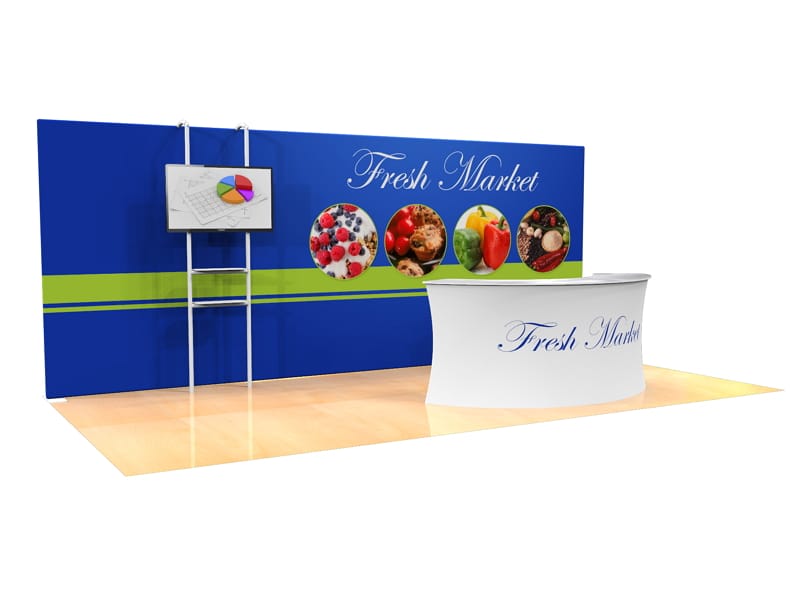 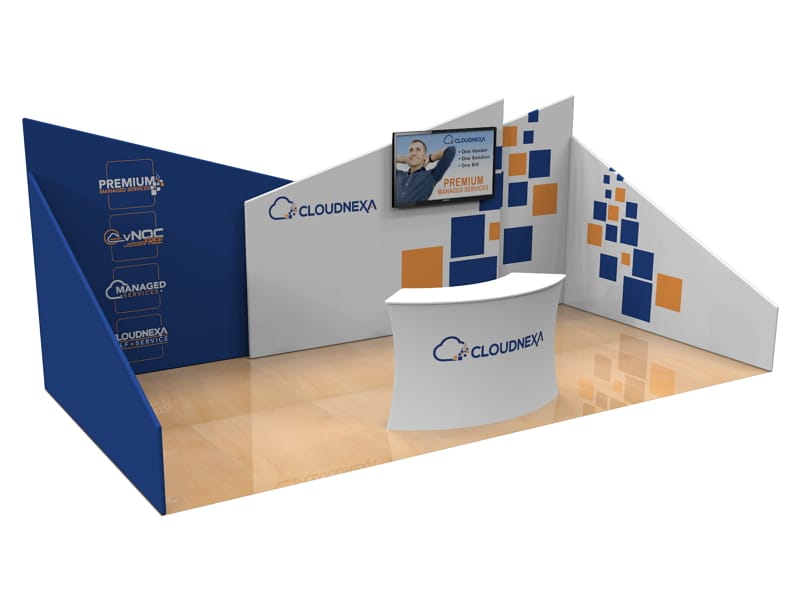 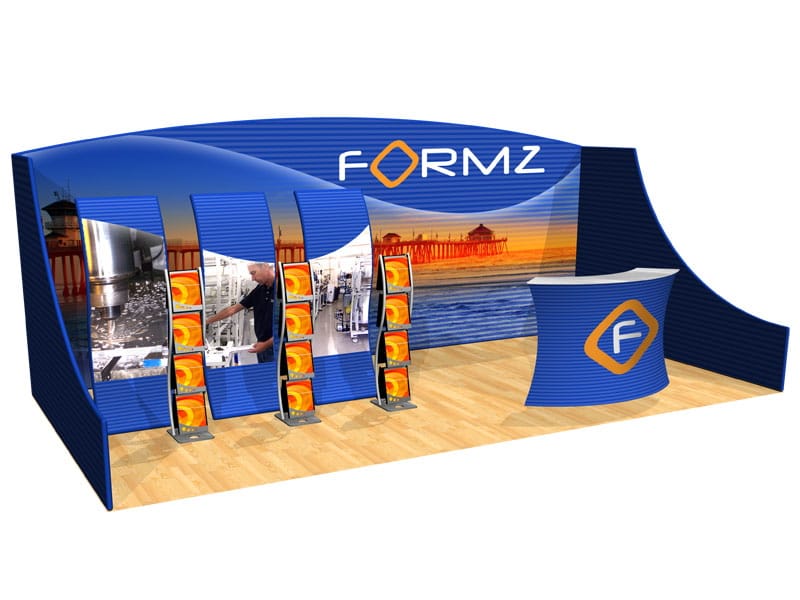 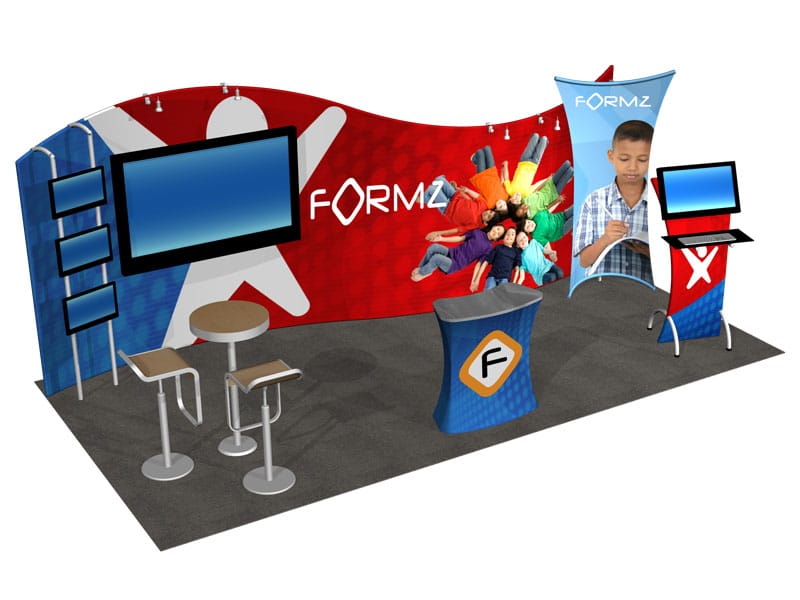 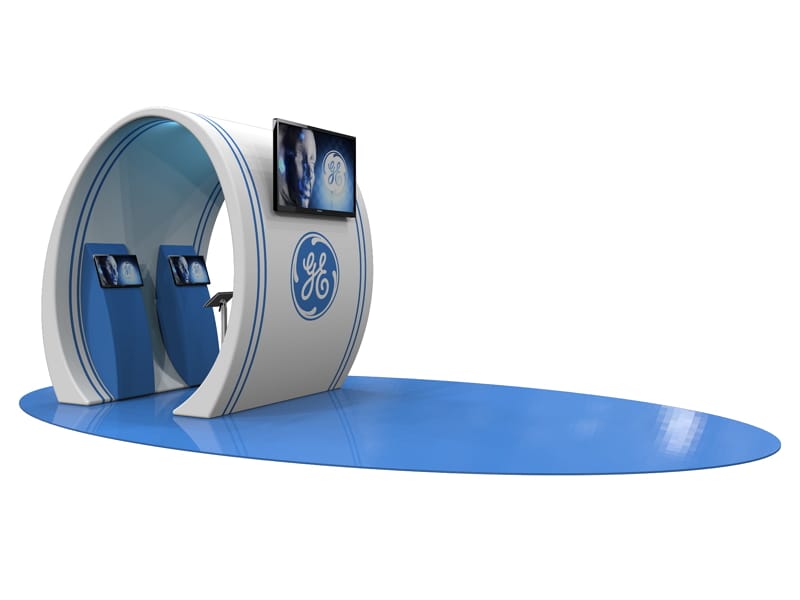 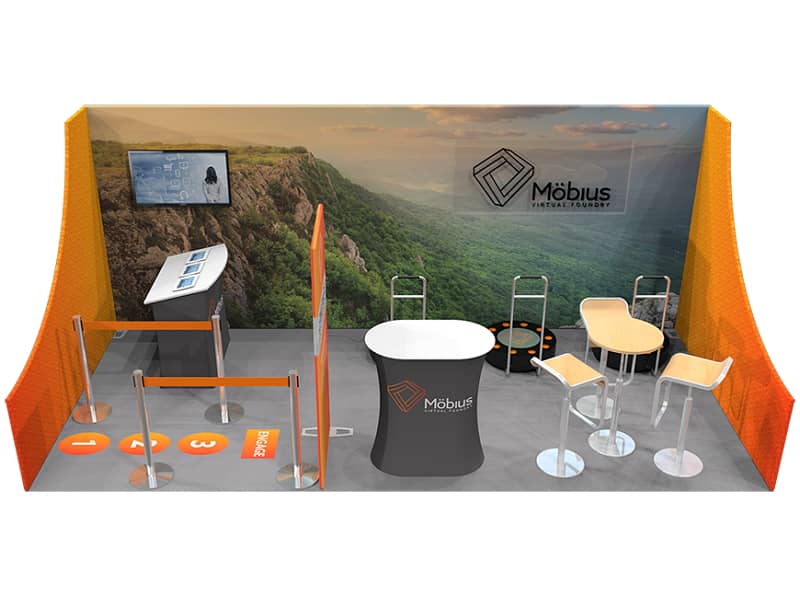 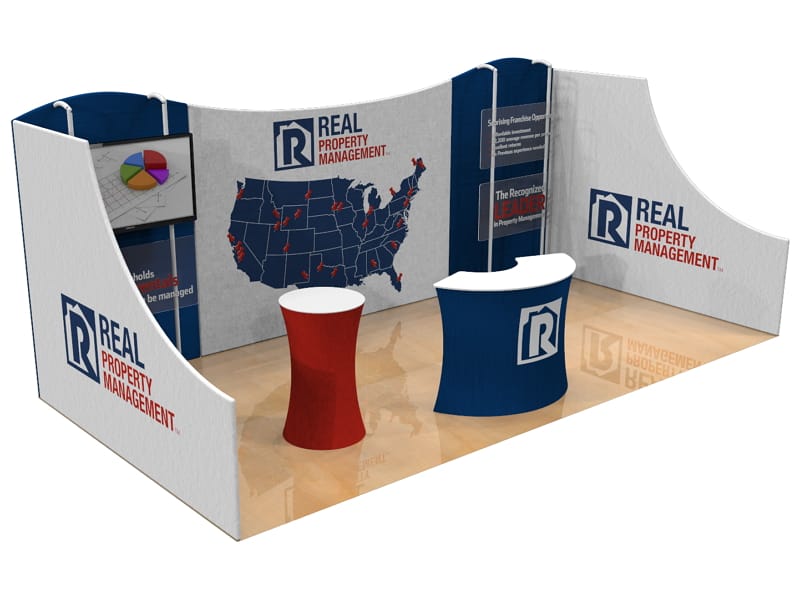 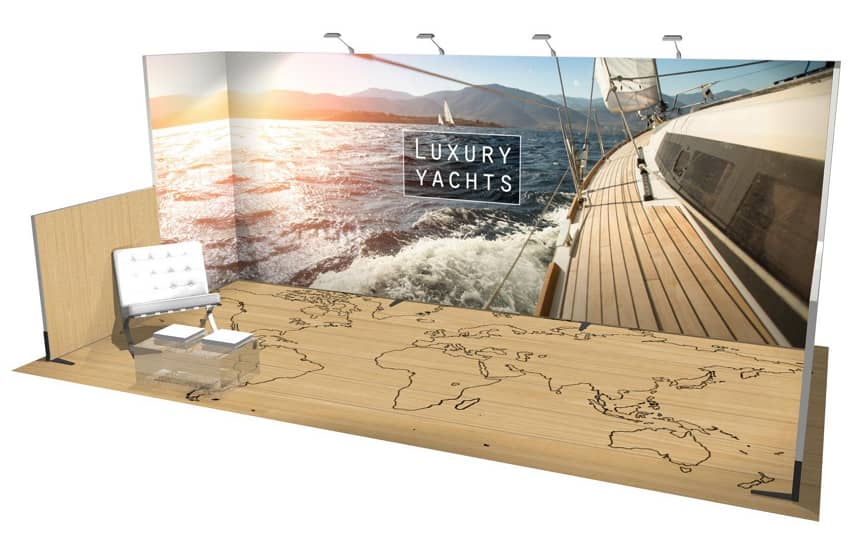 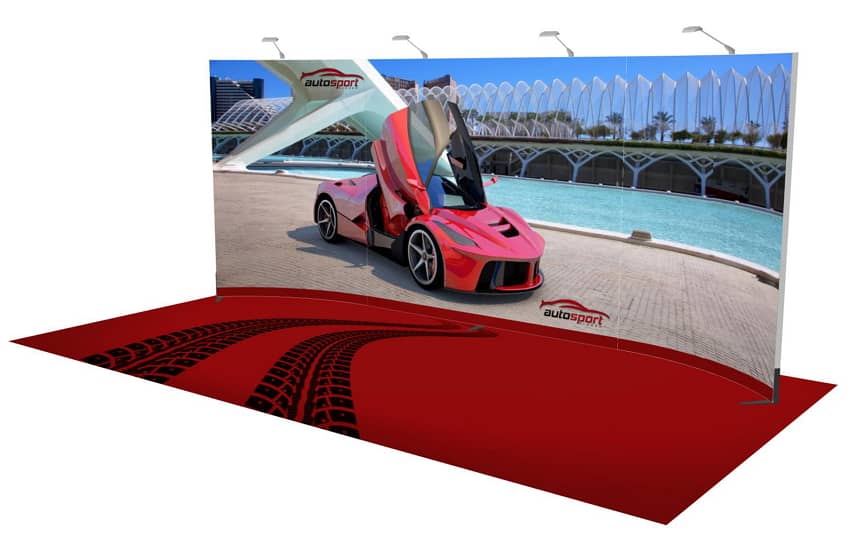 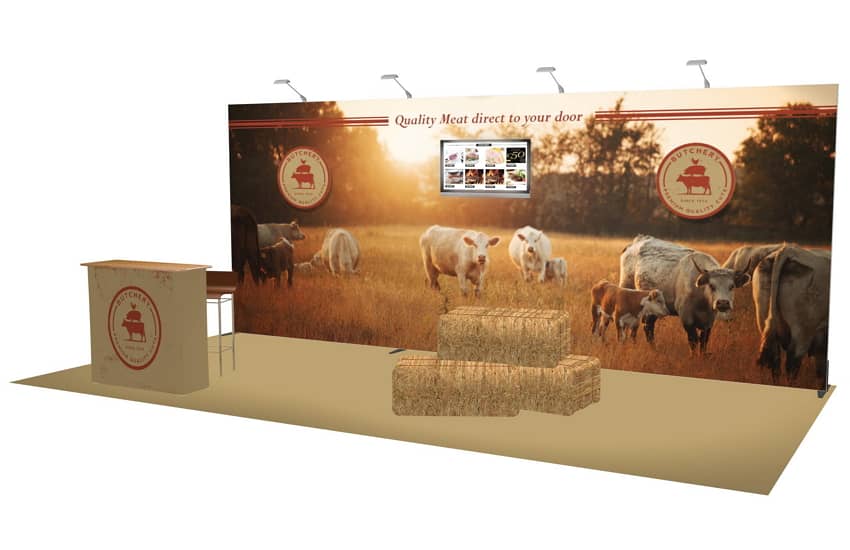